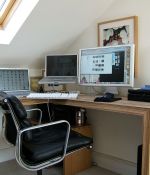 Work AT Home not FROM It

Everyone is struggling with working from home as we collectively face a global pandemic. Meme’s in the millions about it are on every platform. I would argue though that working FROM home is not what we should be trying to do now. We need to be working AT home. From now on. What is the… Read More ›

I can’t be happier than I that mobile has become not only a part of corporate ECM conversations but also part of many IT manager’s ECM objectives. I’ve been watching the mobile space since 1996, when I got to play with the Nokia 9000. From the once giant Finnish mobile phone company.  Mobility is in my… Read More ›

After Nokia sold the rights to its mobile phone division to Microsoft, I was left wondering, “What Next?”  Being Finnish, it was tough loosing such a huge part of national heritage, a pulp and paper mill from the 1800’s that became a mobile phone giant.  After the acquisition we were left with “Angry Birds.”  But… Read More ›

Being the resident Finnish Big Man I have to say, it’s about time this happened.  It’s like Ross and Rachel on Friends.  Everyone new that Microsoft would by Nokia.  Well at least the 5 million Finnish people knew.  Granted it’s was just the phone division but that’s good for both.  I’ve said it before, Nokia… Read More ›

Greatest Secret of IT Revealed

I am finally getting around to publishing a few posts from my info360 presentation in March where I was asked to speak again on Mobile Content Management. Hopefully by now everyone has at least admitted they need a mobile strategy so I thought I would address some of the trends overcoming what could be the… Read More ›

What Country is the home of the largest manufacturer of mobile phones?  A clue, the same country that is home to the company with three of the top ten paid apps on iTunes.  Give up?  Finland.  Yes I said Finland.  As I like to say, “Nokia is a river in Finland not a company in Japan.” … Read More ›

When will ECM Go Mobile?

I like to say, “Nokia is a river in Finland, not a company from Japan.”  Few people know that mobile phone technology and smart phones got their start in the late ’80s in Finland (and Sweden).  I remember having lunch in the mid-90s with my cousin in a cafe in Helsinki when he mentioned needing to… Read More ›